Industrial Control System Based on MiniGUI

By using FMSoft’s MiniGUI, the industrial control system can easily be built on OS as uClinux, Linux, eCos, VxWorks, and uC/OS-II. The solution is as shown in Figure 1.

This solution has the following advantages

Cooperated with FMSoft, Italian ELBO CONTROLLI s.r.l researched and developed a new generation of feeler instrument based on MiniGUI as the system and uClinux OS. This product has been put into market already. 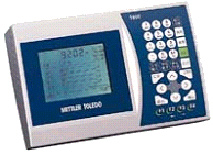 Mettler-Toledo Group has invested and built up two affiliated companies in China which are also the leading weighing and analysis instruments companies in China. Mettler-Toledo (Changzhou) Weighing Equipment Co., Ltd is the first affiliate company jointly build by Mettler-Toledo Group in China. T800 truck-scale terminal is Changzhou affiliate company’s top grade truck-scale instrument. It adopts big LCD lattice display with high brightness to display and input Chinese characters, letters, and figures; it can connect with simulating sensor weighbridge and digital sensor weighbridge at the same time; besides, it can collect data according the different items as truck number, cargo name or other user needed items; it is equipped with embedded Ethernet and USB interface, and is an intelligent weighing display control instrument for the 21st century. This instrument has be sold in domestic market and exported to four European countries and Thailand. The localization for instruments exported to European countries and Thailand is completed by FMSoft.

This is the computer numerical control system designed for high-performance numerical control machine of Tsinghua University Manufacturing Engineering Institute. It adopts RT-Linux as the real-time OS and human-machine interface designed based on MiniGUI.