Such terminal applies VoIP (Voice on IP) to realizing functions such as communication, chat and the like by means of access to Internet in low cost. WiFi phones, WiMAX phones, Skype phones and the like are typical examples. Products of FMSoft have been applied to VolP phones successfully.

Feature phones generally run a simple RTOS (real-time operation system), such as Nuclues, ThreadX, OSE and the like. MiniGUI can run on almost all RTOSes. We can use MiniGUI to build a solution of a low-end feature phone, as shown in Figure 1.

Advantage of the solution

MiniGUI 3.0 can also run on operation systems such as Nuclues, ThreadX, OSE and the like and supports user interface effects and UI special effects similar to iPhone. In addition, mDolphin 3.0 browser can also run on MiniGUI 3.0, so as to support Internet accesses via WEB/WAP protocols.

Figure 2 Solution of high-end feature phones based on MiniGUI 3.0/mDolphin 3.0

Based on special effects developed by MiniGUI 3.0, you can click here to download a demonstration program which can run on Windows.

Advantages of the solution

Note: in order to have good software performance and UI special effects, it is suggested to apply a baseband chip having a processor with the main frequency higher than 200MHz.

Lenovo “Shijie” TD30t is a TD-SCDMA/GSM dual-mode handset, characterized in simple and vertical figure in combination with a design of circular arc edges and corners for flexibility and light weight, instead of “big” figure of a traditional TD product; body thereof has many fashionable colors, combined with “argent” painting, characterized in fashion and beauty. As a 3G phone, TD30t supports typical 3G applications such as video telephone, CMMB mobile TV, walkman, mobile video and the like. A user can have a smooth video communication with your families and friends at different places face to face by means of a head camera; high-speed mobile Internet access functions of 3G are also transplanted to TD30t phones, which can be connected to a computer directly as a wireless network card, for free on-line information reference and mail sending and receiving and enjoying mobile office. 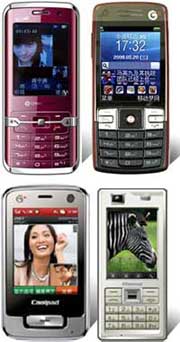 In 2008, China-made 3G standard TD-SCDMA had an obviously increased commercial progress. Among 200,000 phones purchased by China Mobile through tender invitation, more than 100,000 phones applied MiniGUI as a graphic platform thereof. ZTE U85 and HS-T68 belong to typical TD phone models.

In 2009, TD-SCDMA 3G network of China Mobile has been put into commercial trial for more than one year. Through the commercial trial, China Mobile has accumulated rich experience for the popularization of 3G network based on TD-SCDMA standard. At present, in the market of mobile 3G phones (namely TD-SCDMA phones) in China, over 50% 3G phones apply MiniGUI as graphics user interface thereof. In the first part of the year 2009, among 3G phones of 4 models deeply customized by China Mobile, phones of two models applied MiniGUI, which were ZTE U210 and Coolpad F69. China Mobile will adopt a “prepaid charge and nil purchase” policy to popularize deeply customized 3G phones. Obviously, with the upcoming establishment of China mobile TD-SCDMA network and coverage of 218 cities in 2009, there will be millions of 3G phones operating MiniGUI and other MiniGUI-based application software in China.

On Hongkong Telecom World in 2006, Datang Mobile Communication, as a leading enterprise in the Chinese communication field, grandly rolled out a TD-SCDMA 3G phone terminal software standard platform Arena which adopted ThreadX as a real-time operation system and applied MiniGUI and Fhas application development platforms of FMSoft to be graphics display systems and terminal application development platforms. Such platform is the most important software platform solution of Datang Mobile communication among 3G phone solutions. At present, more than ten phone manufacturers and phone design-houses have selected such a platform for the development of 3G phone products, such as ZTE and TCL, which indicates that MiniGUI has become a phone de-facto standard of TD-SCDMA standard platform.

The company takes VxWorks as the real-time operation system and selects MiniGUI, a product from FMSoft, as graphics system, Fhas application development platform (smart phone version) and Fhas application development kit to research and develop a Wi-Fi phone based on SIP protocol, with functions such as address book, communication, call history, e-mail, Japanese input method and the like and capable of distributing SIP communication protocol and related Wireless information; and a lightweight built-in database is provided for data storage.